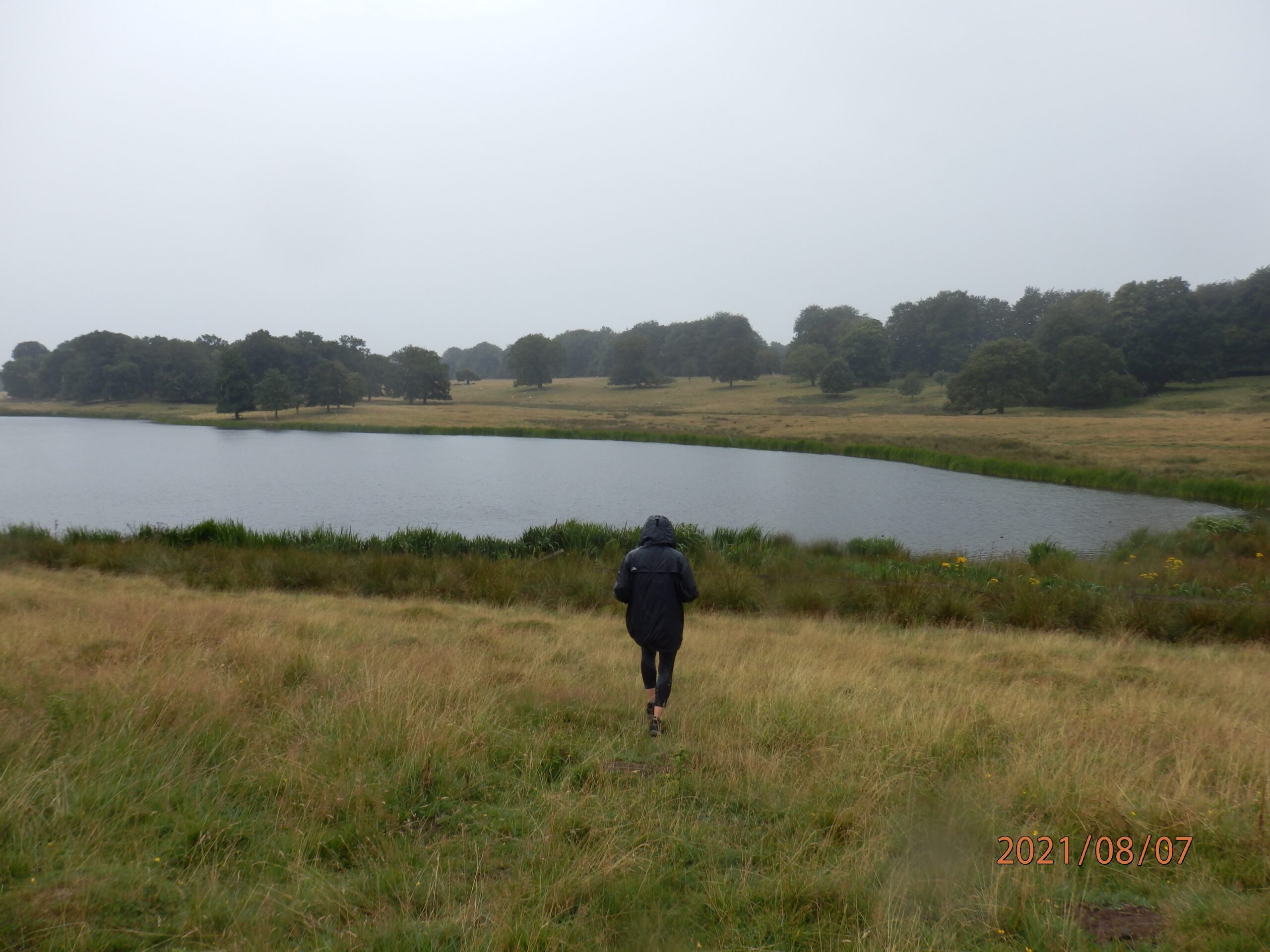 “Things in the margins, including humans who wander there, are often on the brink of becoming something else, or someone else.”
― Barbara Hurd, Stirring the Mud: On Swamps, Bogs, and Human Imagination

With tests completed and many zoom meetings since the beginning of the year, today was the first time Deb, Ros and Phil all met in person.

Tatton Park sits on top of a substantial area of subterranean brine activity; areas of subsidence are evident throughout the parkland if you know how to read the landscape.

Previous walks and conversations with Ros had helped me understand how to read potential markers in the landscape.

Based on these conversations I had already visited with the FARO scanner and taken some Lidar scans of points, which I felt a connection to or where I imagined a subterranean spring might be running beneath.

With no previous knowledge of the park or history of the local landscape other than the knowledge of the potential presence of subterranean brine springs Deb began walking and mapping the invisible landscape using her incredible water dowsing skills. 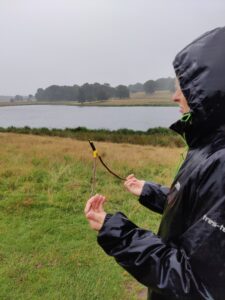 For Phil and Ros this was the first time they had seen her walking and reading the flow of energy lines using her Hazel. Her reaction was instant and clear, strong forces pulled her directly towards the hall and Melchett Mere. 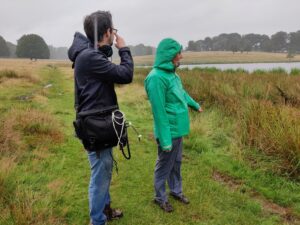 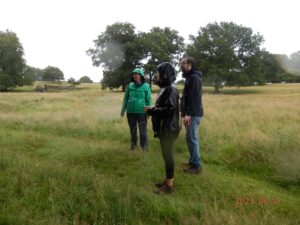 We spent some time following lines of energy, watching Deb pace out the direction and flow of the springs she sensed. Ros observed quietly noting Deb’s readings and adding her extensive knowledge of the geology and industrial past of the area.

Phil walked following Deb’s line with coils of wire and recording equipment to capture the disturbances in magnetic energy as we walked across the parkland. 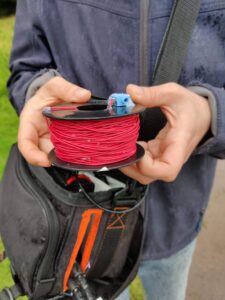 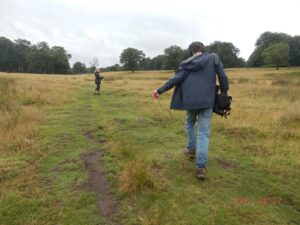 The intention of the day was to explore how the walking body is able to receive and decode invisible energy. Walking established a particular relationship with space, different to other modes of travel.

Even though all walking together the experience was a very solitary one, each one of us experiencing a very different landscape. Here our walking bodies were moved by the landscape by connecting to the pulse and rhythms of place.

I found myself losing myself in possibility, thinking in different timescales and mostly unaware of anyone else in the park. Watching, listening and imagining opened up a new awareness of my own body and what happens when I walk.

I recalled what Ingold (2020) refers to as Mind-Walking, walking through different timescales and imagination.

I compared my previous site visits and selected locations for scanning with the Lidar scanner to Deb’s lines and centre points of the underground springs. Interestingly, my scan points were very close to those centre points.

Ros was also able to confirm her theoretical mapping of future areas of subsidence using the combined understanding from her geological expertise and the depth/flow readings mapped through dowsing.

The sonic recording of magnetic activity was the biggest test of the day, we were all sure that there must be disturbances in the energy created by the unseen flowing streams but we had not had the opportunity to test the recording methods. Phil’s expertise in field recording and capture of unheard sounds using contact microphones and bespoke equipment enabled him to formulate a method of recoding to attempt to capture this sensory layer of the landscape which surround us while walking.

As always the weather and land itself informs and determines what is revealed or experienced. The rain and wind made their mark, creating challenging conditions to record in, to listen in and to walk in.

We had a break in the weather in the middle of the day where we were able to go back to the active points and capture the magnetic energy traces.

Audible clicks were heard through headphones as we walked across the centre points of underground streams. Phil noted the difference between recording at Tatton compared to urban environments where there is a constant magnetic noise from the manmade structures and equipment surrounding us in our daily lives. At Tatton the only background noise appeared to be from the recording equipment itself.

As the weather closed back in we spent the afternoon listening to the data collected and discussing the experiences of the day.

Surprisingly, we discovered that we actually needed to listen in different speeds/ timescales to hear the full sound event. This was not something we had previously considered; the realisation that our unheard captured traces contained layers within them was unexpected and exciting. Phil had amazingly captured an invisible immersive moment, moments we could then re-experience through a vibration speaker in a very visceral way.

I am excited to see how these new layers of seeing will inform and build the imagery I am creating. Understanding how my body is receiving unseen energy when walking invites possibilities to explore how I translate my sensory response to walking in the landscape.   Negative and positive charges surround us; negative/positive space has been present from the beginning of the project but is becoming more relevant. Which is more important, solid space or negative space?

For me drawing has enabled a way for me to think about my body in the world.

Drawing line by line, over time, temporal, fragile, instantaneous, state of flux, all drawing is of the moment, you are looking, acting and reacting while you are thinking and feeling both analytically and instinctively. The drawing becomes the residue of these relations, making them visible.

The new works being created as part of this project reflect the relationship between inside and outside, boundaries between the two cease to be clear and the hand made marks serve as a kind of border between two experiences.

1 thought on “Letters to the void – Walking body as receiver.”