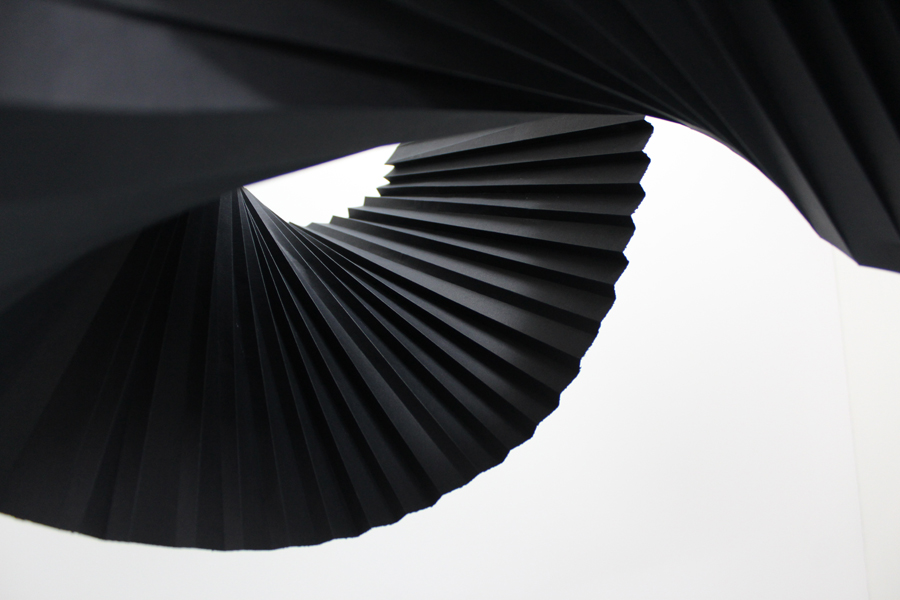 Following on from previous work in the print window – MEASURING STATES #1–#2, I had the pleasure of presenting new sculptural drawing work in the main window space ahead of POROSITY, my upcoming residency at AirSpace in April/May this year.

The shapes of the paper forms are formed in direct response to Hodogram visualisations of captured sonic recordings of subterranean Cheshire. Subsidence from former mining and current flowing brine rivers are recorded and plotted over 4 dimensions creating beautiful digital maps of unheard sonic traces in space and time.

Using the gallery windows to incorporate the Hodogram outlines, two drawings are applied directly onto the glass while a vibration speaker sits in the center of each drawing playing out captured sonic traces.

The windows became giant speakers; passers by were able to simultaneously see, move along and feel the landscape traces by placing their hands on the glass to feel the vibrations.

Folded Force brings together various ways of responding to and mapping the landscape, layering different forms of interpretation into the strata of the artwork and challenging the relative legibility of geophysics, scientific data, and creative practice. These pieces specifically explore what happens when unheard traces of sound and unseen views occupy the same space?